Project Managers use the Critical Path Method algorithm to derive the minimum time taken to complete each activity with minimum slack. So, what is a slack?  It is the time delay in a particular activity that doesn’t contribute to the delay of the project completion time. Slack can also be called a Float.

So, a Critical Path Method is usually represented by a network diagram that comprises a sequence of activities required to be completed for the entire project completion as shown below. Once these activities are sequenced and the paths are defined, the duration to complete each and every activity is mentioned from which we can derive the path that will take us the minimum time to complete the entire project.

The presence of more than one Critical Path

This essentially means that the successful completion of the project now depends on those several critical paths that comprise their unique set of activities which makes the process unpredictable due to the complexity of their functions, therefore, posing risks on the completion.

Critical Path can change over time

Let's say initially you assumed the near-critical path was ten days and the actual critical path was eleven days. Now, for some reason, an activity gets completed a couple of days early. So, it then becomes important to keep updating these changes in the project plan.

The critical Chain Method is another schedule network analysis method that primarily takes resource limitations, task dependencies and buffers into account to prepare a project schedule. A critical path does not take these variables into consideration but a critical chain does which makes it a more reliable and suitable design to arrive at the deadline. So, we can say that a critical chain method is just an updated version of a critical path method. All the high-risk activities are first scheduled in the earlier stages of the project which allows these activities to get completed early and also gives buffers to any unexpected problems if they arise.

What is a buffer? The buffers eliminate the concept of slack in the path by becoming a safety net for certain activities with a lack of resources that eliminates/reduces delay of the project and protects the promise of the project completion date.

What is the main objective of the Critical Chain Method? It is to reduce/eliminate any unnecessary slack or uncertainties in a project.

In the below representation we see six primary steps in a critical chain method.

There are three types of buffers in the critical chain method 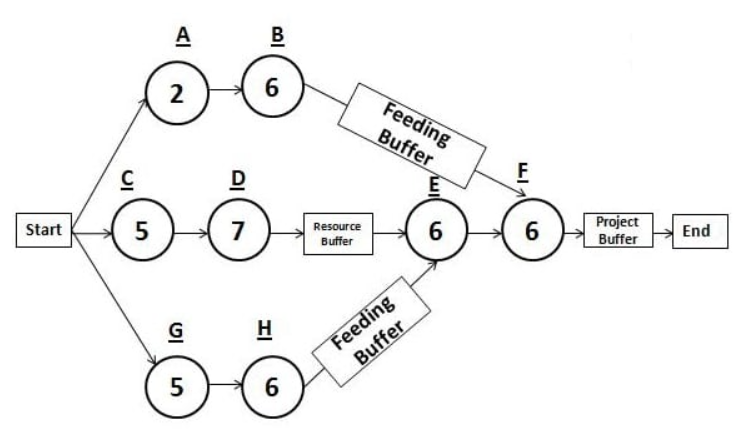 Let us assume that there is a construction project that needs to be completed within a certain timeframe. So, we design a corresponding critical path in order for us to complete the project. We begin the work. However, along the way, some limitations come up. For example,

These are typical examples of unexpected resource limitations which we had not taken into consideration while designing the critical path for the project. But now that these appear our schedule gets delayed due to these unforeseen circumstances and so we are to include these variables in our critical path which then becomes our critical chain method analysis. This network design contributes to a more realistic timeline of completion of the project.

Hence, a critical chain method is always a more complete network design and hence is preferable to a critical path because, unlike a critical path, here we take into account resource limitations which can show up uninvited at any given time/stage of the project which then allows us to be prepared for sudden uncertainties without causing a delay in the overall project completion.