FIVE PMP TERMS YOU NEED TO KNOW BEFORE YOUR TEST

An individual or a group that may affect, be affected by, or perceive to be affected by a decision, activity, or outcome of a project. Some typical stakeholders are as depicted below. 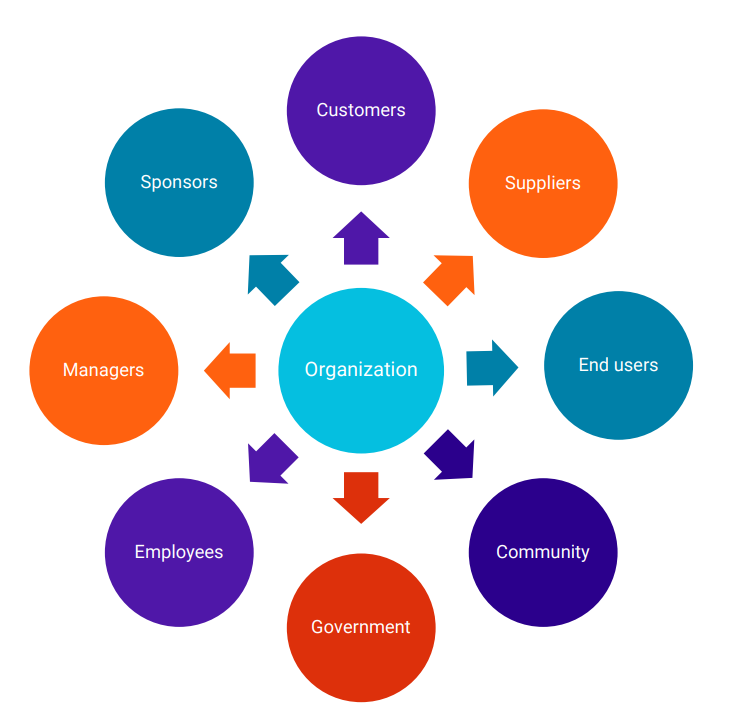 We take expert advice who suggest names that would be the most suitable as stakeholders in a particular project depending on their experience with those stakeholders.

We make a questionnaire through which we gather the pros and cons of every single name that gets called out to look into their past contribution as stakeholders.

Data analysis through a record that would have separate tabs for each and every measurable parameter like the promptness to response, time taken to deliver, number of accountabilities taken etc. comes into the picture so that it becomes easier for decisions.

We do this exercise to map the stakeholders. We use two-dimensional grid and stakeholder cubes to do the mapping.


A structural decomposition of a project’s total scope of work into smaller packets or compartments so that the completion of these individual smaller tasks accomplish the project objective in the end and deliver results as required.

WBS contributes to increased productivity within the team as these separate chunks of tasks can be done simultaneously by the team members therefore making the project better managed.

HOW TO CREATE A WBS?

As a Project Manager one must assess the entire scope of the project by meeting with the key stakeholders. Different tools like the Gantt charts, spreadsheets or flowcharts can be used to derive the connectivity between the different smaller tasks. Equal priority must be given to each and every critical input. Once this is sorted, each and every team member is then assigned a specific task which they can do as per the workflow.

CHARACTERISTICS OF A WORK BREAKDOWN STRUCTURE

Basic characteristics of a WBS is that the parent tasks completion depends on the structural or simultaneous completion of its several child tasks. Every single task can qualify itself to become a parent task depending on whether the particular task can be further broken down as shown below. 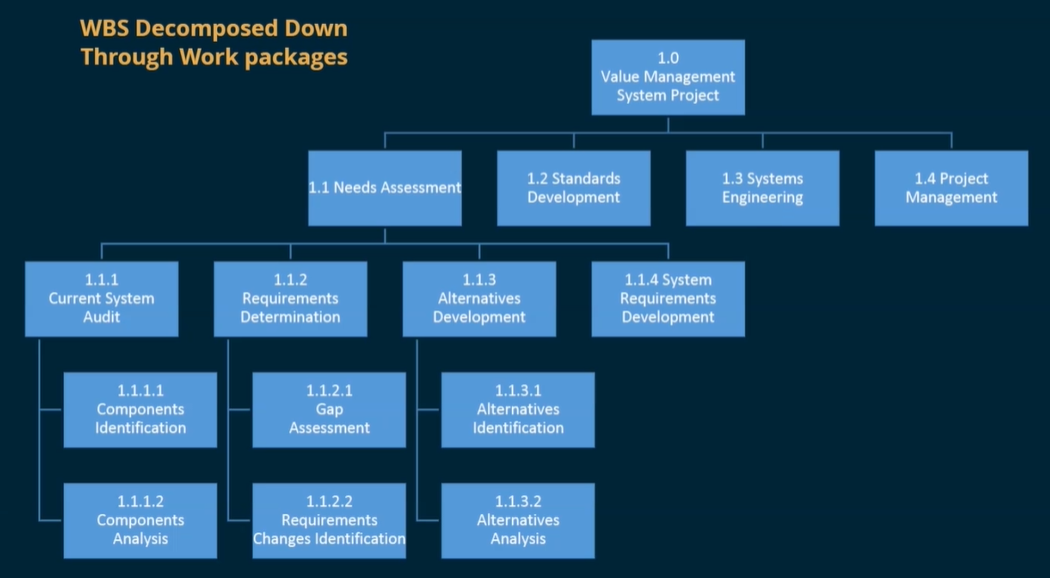 
Its easier for a Project Manager to manage the project when its broken down into smaller phases with each phase having several components as tasks which are goal-oriented and are typically reviewed at the end of the corresponding phase.

Here we see the different phases of a project lifecycle. 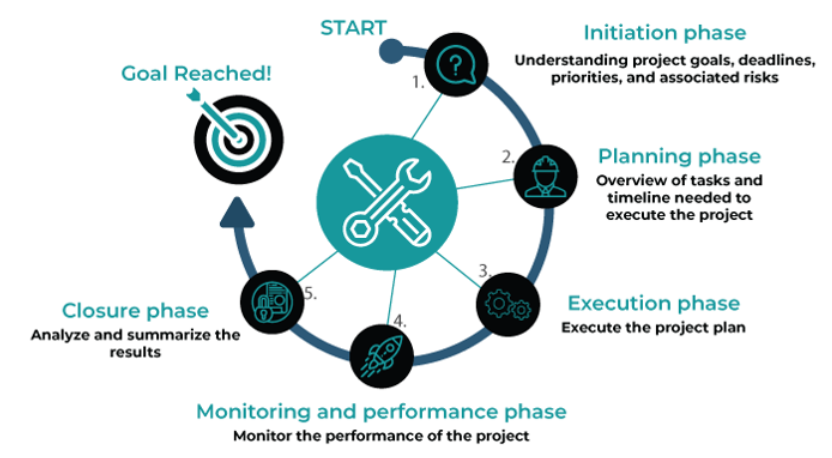 The first phase of the project lifecycle where the entire scope of the project is studied. We strategize here for a succesful project completion. The project’s business value is assessed thoroughly in this phase.

Once the objective is clear its a matter of cohesive planning that must be followed by the team. The planning is to sustain the team with working on the project right from the starting through the implementation till the closure of the project.

Its the implementation phase where the resources are aligned with their respective tasks to deliver the results. Any feedback from the customer is also used to improve the project further in this phase.

In this phase the team tracks the progress of the project. It checks if the project aligns with the original plan expecially considering the timelines and the financials that were allocated initially.

The release phase when the product is ready for delivery. Sometimes, the failure of the project can also be the closure phase.

Also known as the Fish-bone Diagram, the Ishikawa is used to get to the root cause of an issue. Especially when we are dealing with complex problems with multiple variables there is high chance that a small factor could have contributed to a massive breakdown in the process. In order to figure out such factors we design an Ishikawa that is represented as shown below. 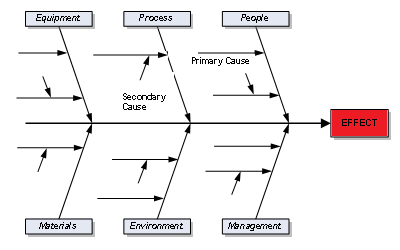 This is designed to determine the most probable causes that lead to the effect and doesn’t have several complicated branches.

Mostly used for critical supply chain disruptions and is focussed on four parameters as the main causes - Surroundings, Suppliers, Skills and Systems.

Used mainly in the manufacturing category, this focusses on Man, Machine, Measurement, Material, Method and Environment as the main causes of a breakdown.


A Project Charter is a short, formal document that includes the details of the entire project such as its objectives, stakeholders, the how-abouts etc. While creating a Project Charter we need to keep in mind about the following:

Understand the goals and objectives of the project thoroughly.

Define all the roles and responsibilities of the different stakeholders of the project.

Make a list of the potential risk areas or problems so that any such thing can be prevented later on.

HOW TO WRITE A PROJECT CHARTER

Use bullet points to write down short statements while keeping in mind that a charter is an overview of the entire project and not a detailed presentation.

Create a simple template that can be used for all the projects and that can be easily understood by all the team members.

USE INFORMATION FROM TEAM

The team members can provide valuable insights in terms of the benefits or shortcomings, usage or potential faulty areas of the project which can be used in the charter. 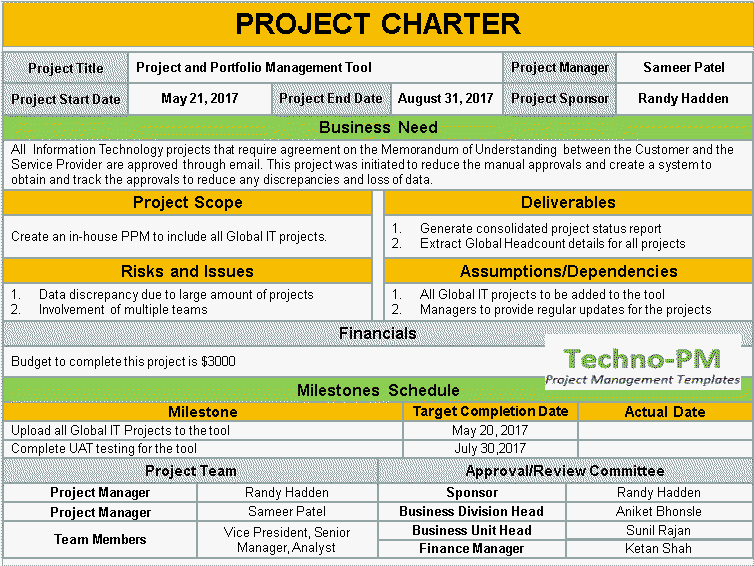